I’m posting a day earlier than usual because my week is filling up quickly with all the Christmas things I’ve left until the last minute–baking, shopping, wrapping!

If only my living room looked like this one! Image courtesy Depositphotos.com

I’ve gone through my files for some oldie-but-goodie guest posts from a couple of years back about Christmas in Regency England. The holiday celebration was a wee bit different then.

If you’re following along my party posts at The Romance Studio Christmas Party 2015 (and I hope you are because I’m giving away an Amazon gift card) you’ll find the answers to my post questions right here!

So, without further ado:

In my Regency novella, Rosalyn’s Ring, the heroine sets off on a Christmas Eve journey to rescue a young woman. She encounters no holiday trees dripping with ornaments and no Santa Clauses climbing down chimneys.

Wait, what happened to Christmas in Merry Olde Regency England?

Actually, how the holiday was celebrated in Regency England is a bit hard to pin down, but it probably was not a lavish observance. Christmas in England had probably not been extravagant for many decades, since the grand celebrations of the Tudors were crushed by Cromwell and the Puritans. In the spirit of Ebenezer Scrooge, the Puritan parliament in 1645 declared December 25th a working day. Countess Maria Hubert von Staufer reports in her A Thumb-Nail History of Christmas in England that even the making of Christmas pies could be grounds for arrest.

Still, some traditions survived the war on pies and plum pudding and would have been observed during the Regency period. Decorating with evergreen boughs and mistletoe (and kissing under the mistletoe!), wassailing, acting out pantomimes, and singing carols, were very likely part of the holiday celebration, and much more prevalent in the country where families gathered for the season. Christmas trees and Santa Claus did not become popular until Victorian times.

Traditionally, landholders returned to their estates for the holiday to open their homes and host celebrations for tenants and neighbors, a practice that dates back at least to the Elizabethan era. According to historian Mark Connelly, author of Christmas: A Social History, Elizabeth felt so strongly about the custom of Christmas hospitality that she ordered gentlemen to leave London and return to their country estates to observe the holiday. Like people all over the world, the English felt the holiday was best celebrated at home with family, friends, and food.

Regency holiday celebrations might have lacked the extravagance of current day festivities, but revelers would have observed one tradition that predates the Regency era and carries through to this day: the Christmas pantomime.

Mark Connelly says “The pantomime has come to be regarded as a central part of the English Christmas, seen as a genuine part of the scenery on the stage of the national character.”

As an American who has never had the opportunity to celebrate Christmas in Britain, I find it fascinating that the pantomimes were not religious reenactments of the nativity of Jesus—they were more The Carol Burnett Show than The Glory of Christmas. 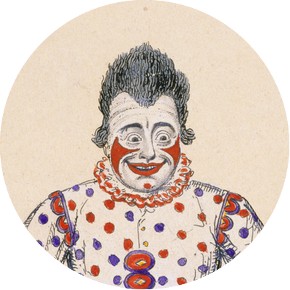 The actor Joseph Grimaldi as Clown in the pantomime Harlequin and Friar Bacon by Bonnor and O’Keefe staged at the Theatre Royal, Covent Garden London in 1820.

English pantomimes had their roots in the Harlequinade, the slapstick, comedic plays with stock characters presented by traveling players. The Victoria and Albert Museum website describes the Harlequinade:

The story of the Harlequinade had the same basic format; a chase scene where the two lovers, Harlequin and Columbine, are kept apart by the girl’s father, Pantaloon, whose servants play tricks on him. In the chase the two lovers are pursued by her father and his servant, Clown.

In spite of the comedic nature of pantomimes, they often dealt with historical themes and expressed a sense of patriotism or nationalism. Even in stories about fictional or fairy tale characters, patriotic lessons were embedded.

In 1756, Harlequin’s Invasion, or A Christmas Gambol was performed at Drury Lane and included a tribute to General Wolfe, who had just won the Battle of Quebec. In 1813, The Corsican Fairy; or, Britannia’s Triumph, made fun of—who else?—Napoleon.

So there you have it!

When the heroine of Rosalyn’s Ring arrives at an isolated estate on a cold snowy Christmas Eve, there are no prospects of a pantomime, or even a pudding. She does, however, find love, and isn’t that the best gift of all?

Whether or not you celebrate Christmas, I wish you a happy December 25th surrounded by friends and family!

If you’d like to read more about Regency holiday festivities check out these posts by Regency Authors Regina Scott and Jo Beverly.