First let me share that on July 22nd I celebrated the third anniversary of the release of Rosalyn’s Ring with a newsletter giveaway. Congratulations to winners, Lesley, LaGina Reese, and Paula Hurdle, and a big thank you to everyone who participated!

Last week I offered a recap of Romance Writers of America National Conference, including this photo from the workshop “Dressing the Part: Costuming Romantic Characters of the 19th Century, a Fashion Show” with author Sarah Richmond and members of the San Diego Costume Guild. I promised more pictures, so here they are!

The program started with the sleek, high-waisted gowns of the Regency era, which if you are unfamiliar with the term, was the period of approximately 1811-1820. If you’re curious about the Regency, see all of my April blog posts, my A-to-Z Regency Lexicon.

The dress modeled on the left would be a daytime dress for a lady not so high in the instep as to not need the protection of an apron when she went about her household tasks. The one on the right is evening attire. Though it’s hard to see in the photo, her turban is particularly impressive. I tried to fashion a turban to go with the Regency gown I wore to the soiree at the conference but wound up with a simple braided crown with an ostrich plume. (See the picture in last week’s post.)

After the workshops, I had a chance to speak with the evening gown model, who also sewed the ensemble. She created the turban with some very intricate tying of a ten-foot length of matching fabric that she’d machine-embroidered along the edges and trimmed with fringe.

Moving into the Victorian Era

The years 1825-1840 were a transitional period for fashion, with sleeves puffing out and waistlines dropping.

No one does the fashions of this period better than author Loretta Chase in her Dressmaker Series, but my favorite of her fashion commentators of the era is Sebastian, the Marquess of Dain, and hero of Lord of Scoundrels, set in 1828:

She was not wearing a ridiculous bonnet, but a lunatic hair arrangement even more ludicrous. Shiny knots and coils sprouted from the top of her head, and the pearls and plumes waved from the knots and coils. The coiffure, in Dain’s opinion, was silly.

That was why he wanted to rip out the pearls and plumes and pins…and watch the silky black veil ripple over her shoulders…white, gleaming in the lamplight.

There was too much gleaming white, he noted with a surge of irritation. The oversize ballooning sleeves of her silver-blue gown didn’t even have shoulders. They started about halfway to her elbow, primly covering everything from there down–and leaving what should have been concealed brazenly exposed to the view of every slavering hound in Paris. 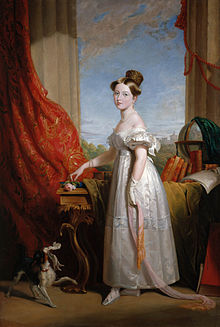 Queen Victoria took the throne in 1837 and reigned until 1901. The Marquess of Dain must have been reeling to see the flounces, frills and full-skirted lunacy of this era!

These two lovely bustle gowns would have been fashions of the 1870s. Aren’t they amazing?

Keep in mind, the models made their own dresses. It’s hard to see in this picture, but those are pleated ruffles on the blue gown, all pleated by hand.

As a seamstress myself, I’m in awe of the hours and skill that went into the construction of these bustle gowns, but I much prefer the lines and simplicity of Regency fashions.

What about you? Which styles do you like better?

Images: All fashion show images are by the author; portrait of Victoria is from Wikipedia.