Although this kind of euphemism seems more appropriate to the  Victorian era, “Inexpressibles” is a Regency term for the attire covering a man’s–ahem–nether regions. 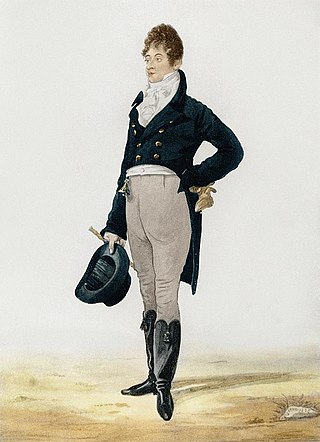 The early Georgian period was a bawdy time, but society became a bit more conservative during the Regency, progressing to the uber-stuffy middle to late nineteenth century. I suppose using a code word for a man’s lower garments fits with this slide into Victorianism, where even bare furniture legs could be an issue.

When I first heard the term Inexpressibles, I was sure we were talking about underwear–Regency briefs, boxers, or as we call them in California, chones. I’ve heard from some sources, however, that Regency men didn’t wear separate underwear, they simply pulled their long shirt tales under their bums. In a post on Word Wenches, author Kalen Hughes says, “not true”, and has pictures of 1805 men’s drawers. (Oh the things Regency authors obsess about!)

Author Sharon Lathan says that Inexpressibles refer to a man’s breeches or trousers,

…clothing designed to cover the lower portion of a man’s body. Indeed, those areas of a gentleman’s anatomy that a true lady would never look at or even think about! [author’s note: unless she’s a character in a Regency romance novel.] Polite company referred to these garments as “inexpressibles” if they talked about them at all. Clearly the gentlemen did not know this fact about the fairer sex since they went to a great deal of effort to accentuate their assets…

My friend Kristen Koster defines Inexpressibles as “scandalously tight leggings that left little to the imagination.”

If you’re at all interested in Regency fashions for men, click over to one of these fascinating posts.