G is for George and Georgian:

If you attended school in America, at some point you studied the history of the American Revolution, when the colonists rebelled against the supposedly despotic King George.

That would be George III. There was also a George I, a George II, and a George IV during the one hundred plus years (1714-1830) of the Georgian Era. The Georges were Hanoverians, imported to rule England because they were good Protestants and not Catholics. George III was the first of his tribe to actually be born in England, and he had an incredibly long reign, from 1760 to 1820. He also had an incredibly fruitful and happy marriage, fathering fourteen children. 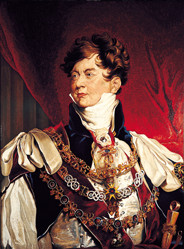 Unfortunately, George had episodes of madness, well depicted in the 1994 movie, The Madness of King George. From 1811 until George III’s death in 1820, his eldest son served as Prince Regent, ruling England in his father’s place.

Thus we call this period the Regency. Oh darn, have I used up my “R”?