In a bit of serendipity, this past weekend I wagered and won on a professional, well-behaved, and still studly character who may be the 2016 Athlete of the Year.

That would be, Nyquist–not Gustav Nyquist, the hockey player, but Nyquist the winner of the Kentucky Derby!

Last  Monday, my son told me he had a chance to go to Saturday’s 2016 Kentucky Derby with a friend who worked for a local Orange County man who owned one of the horses.

As it turned out, not just any horse, but the front runner, a horse named Nyquist!

And of course, being a firm believer in not passing on once-in-a-lifetime opportunities, I said, Go, and put a bet down for me!

It was an awesome race. If you didn’t get to watch, it’s available on Youtube here.

Horses appear in the stories I write, but more as the depersonalized engines that pull carriages, or the unnamed conveyance that carries the hero from point A to point B. I love watching horses run, I’ve been on three trail rides on three pleasant plodders, and I don’t know a hands-on thing about caring for them or working with them.

To gain more knowledge I recently took author Kathryn Jane‘s class “Horses for Fiction Writers”. Interestingly, her first lesson wasn’t about color, or breed, or tack, or training, it was about personality:

Personality emerges as you work with a horse and ask it to work with you… A horse gives us clues about their personality and what’s going on in their head just as a baby’s subtle movements or expressions give you a clue to who they are and what they need.
When I slide my hand down a horse’s leg, subtly asking him to give me his foot so I can clean it out, does he shift his body away, lean into me, lift the wrong foot, simply lift it as asked, or snatch it away as soon as I take a hold of it? Any of this collection of possible responses could be used to represent him being compliant, a jokester, a jerk or an untrained beast with no idea what I want from him. His response could be an indication of personality, manners, or attitude. 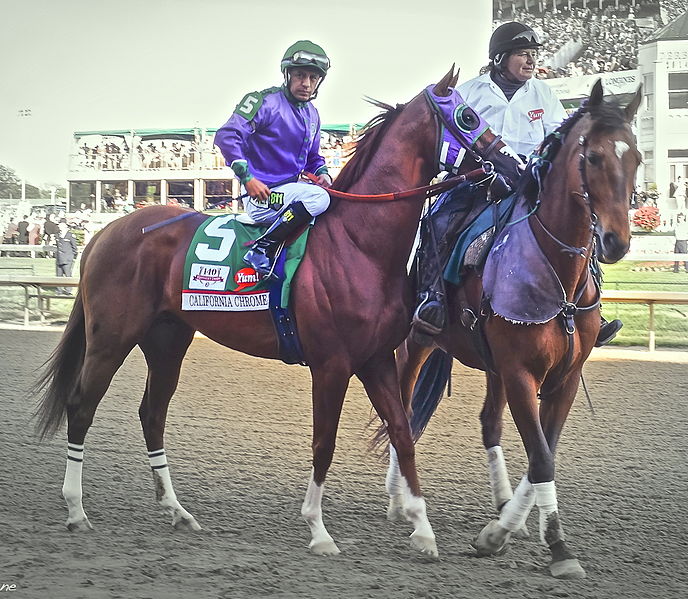 Horses have personalities? Well why not? I know that’s true of my dogs and my cat, and even a parakeet I once owned.

This is such a special horse. You can see it in his eye on a daily basis, and he’s such a professional. Any human sport, he’d be the top-notch athlete. He’s just first class.

The Orange County register reports that Nyquist arrived before his big race and set the mood for his humans!

All week long, optimism had filled the air in O’Neill’s barn. The humans took their cues from the horse. Nyquist settled right in, showing an obvious liking for his surroundings. “…You felt like you were going into the gym with Kobe Bryant,” O’Neill said. “You just knew he was going to pull it out at the end, and he did.”

I couldn’t find a royalty-free picture of this magnificent horse, but you can link to his page on Google images here.

Will this Athlete of the Year make it a Three-peat in the next few weeks and come back to California with the Triple Crown? Stay tuned!